They’re On Again! Pie in the Sky! Part 3

These names represent rugby league and Canberra Raiders royalty and they’re joining forces once more for an all-star game in Queanbeyan this year. Launched, December 2017, the event has been dubbed the “pie in the sky”. It follows on from a match held in Hay in 2011 which brought many of the game’s biggest names together for charity. The match is the brainchild of David Reid Homes managing director Ken Beissel, the event’s major sponsor. Beissel came to Queanbeyan from Hay at age 16 to play for the Queanbeyan Blues where he played with Australian representatives Ian Thomson and David Grimmond. “I played with some of the great footballers of the era and under a great coach in Don Furner,” Beissel said. “What I wanted to do was give the kids an opportunity in my hometown to rub shoulders with some of the greats. Queanbeyan is a second home for me, I just love the place.” With so much of the Raiders history tied to Queanbeyan there are no shortage of club legends lining up to play and be involved. 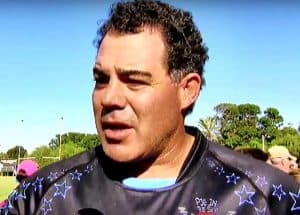 Mal Meninga will coach the all-star squad. Former captains Simon Woolford and Terry Campese will battle for the armband. Jason Croker won’t be able to suit up due to injuries but has promised to run water. Some of the other names that have confirmed they will play include Bradley Clyde, Ken Nagas, Brett Mullins, Quentin Pongia, Matt Geyer and potentially Nathan Hindmarsh. Former NRL referee Bill Harrigan has confirmed he’ll take the whistle in the 80-minute match against the current Queanbeyan Blues side. Current Raiders coach Ricky Stuart is expected to play if he does not have coaching commitments. However, Raiders fans may wish not to see Stuart with the game scheduled for September 28, just days before the NRL grand final. All proceeds from the match will be split between Treehouse, a special needs support service in Queanbeyan, and a respite centre planned by community campaigners Yvonne Cuschieri and Paul Walshe. Woolford, who played in the Hay match, said despite having moved past their playing days the former players inevitably let their competitive natures take over. Quentin Pongia dislocated his elbow in Hay by not backing out of a tackle. “It’s something the ex-players really enjoy, not only the game but the function afterwards and being able to mix with the local communities,” Woolford said. “There’s plenty of guys that couldn’t say yes quick enough.” Queanbeyan-Palerang councillor Kenrick Winchester said he will endeavour to secure council support for the event and provide Seiffert Oval free of charge. “This is a really exciting event for Queanbeyan,” Cr Winchester said. “We get to support some of our amazing local charities in Treehouse and Paul [Walshe] and Yvonne’s [Cuschieri] respite centre. “I’m as big a Raiders fan you could find, I went out to the game in Hay and it was brilliant seeing the legends run around again. “Queanbeyan is the Raiders home so I know they will get behind the event.” Cr Winchester added the game will hopefully add to the momentum for an upgrade of Seiffert Oval. Attribution Elliot Williams, Canberra Times