Building on a Sloping Block Works! 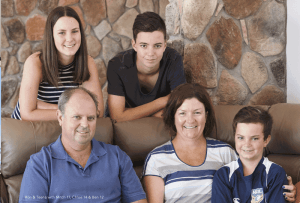 Teena was a bit reluctant at first when the real estate agent showed the Mylers a steeply sloping block in the bush just outside Inverell.

But with encouragement from her husband Ron and the enthusiasm of their chosen builder David Reid Homes, she has not regretted building their dream home with the wonderful views over the distant ranges.

Ten minutes from town they are now living in a stylish retreat they love returning to after a busy day’s work. “We come home and are just happy to sit down here and chill for an hour. It’s a 10-minute drive so there’s time to let go of the day’s stress. Once you get here you’re right,” says Ron.

Teena and Ron are well known Inverell locals. Ron previously worked as an electrician for 15 years at Wilks Electrical and Teena worked in the State Bank and then the New England Credit Union for 10 or so years. They now run the popular MacIntyre Hot Bread Shop, having bought the business in 1999 from Ron’s father who established the shop 30 years ago. 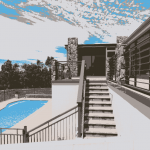 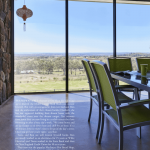 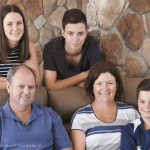 The couple have built up a thriving bakery business and Teena runs the ‘smoko van’ servicing the industrial area five days a week and local sporting and other events on the weekends.   “We started in the bakery with three cooks and two staff, we now have six cooks and 15 staff altogether… so it’s growing,” says Ron.

Teena’s other interest is scrapbooking. She became a consultant six years ago and sells scrapbooking products as well. “I have the space here to hold classes and workshops so all the ladies come out and use my tools.” The couple are both very busy.

This is the third house they have built and the Mylers knew what they wanted, a bush block larger than two acres that you have to mow every weekend. “Eight acres is just big enough to only have a house block to look after and leave the rest scrub. In 2010 there were no houses out here and only a dirt track.” They enlisted the assistance of friends Kylie and Dan Wilks from David Reid Homes, with extensive experience building on a sloping block.

The sloping block was not a problem for David Reid Homes 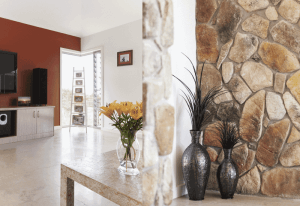 “We couldn’t see how anything could be done as it was quite a steep sloping block. We did three cuts and filled where the shed is, and down here,” says Ron. “Dan was really hands on. He helped us pick the best aspect. He brought out Blakey, his architect, and we all put our heads together.”

What an achievement! Walking through the front door into the open plan living area is ‘wow’. High ceilings and large sliding doors overlooking the 12-metre pool and distant ranges enhance the sense of space. The skylight above the stairwell leading to a large downstairs rumpus room and Teena’s office and scrapbooking workroom adds even more light.

The house is functional and practical and very down to earth. Teena wanted the interior to be fairly simple. White walls work well with the rock feature pillars at the entrance. She chose the green-tiled splashback in the kitchen and a big slab of Caesarstone for the bench tops. The open plan interior with large 10-metre wide sliding glass doors opening onto the balcony feels like living outdoors. 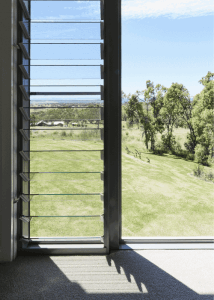 “The floor to ceiling doors are open nine months of the year,” says Ron. “We have lots of barbeques with friends and family and really enjoy sharing the relaxing views.” The earthiness of the interior is enhanced by the polished concrete floors on both levels. Teena loves how versatile and easily cleaned they are. “It’s different, it has quite an industrial feel to it. We wanted the really shiny gloss. We wanted the wow factor,” says Teena.

“There’s enough space for our boys to just move the table to play handball or cricket inside.” The concrete flooring means the house is surprisingly warm during winter. “It could be five degrees outside in the middle of winter but if the sun’s shining we don’t need the gas heater till the sun goes down. If it’s overcast we turn the heater on,” comments Ron. “In summer the house is cooled by ceiling to floor louvres everywhere to enhance air flow.”

Outside the rock pillars supporting the two-storey structure are an arresting feature. Teena stumbled across the ‘rocks’ on a Melbourne website. They are hand-made out of concrete about two inches thick and put together like a jigsaw puzzle, glued on to the brick wall behind them. “The rocks are called ‘Mt Hotham’. We had no idea why till we were skiing at Mount Hotham and that’s what the rocks look like there!” laughs Teena.

“We deliberately put the garage on the first floor level and there’s no steps at the front door, so everything is accessible. As we get older it makes sense,” says Ron. This is using the sloping block to its best advantage. The Myler’s home was completed in 2010 and the garden is an ongoing process. They mulched and planted out the bank in front of the pool. “We just wanted something that was green and easy care.

It’s a whole new world up here, like floating. It’s a beautiful spot.”

Every morning we wake up and there’ll be kangaroos here. The dogs don’t worry about them now. We’ve kept the bush aspect,” says Teena. “Because the house is so high you are a part of the view, a part of the landscape. It’s a whole new world up here, like floating. It’s a beautiful spot.” The sloping block was not a problem after all.